Is The Pole Shift Affecting Humans?

Posted by Kelly Flack on Tuesday, February 1, 2011 Under: Mother Nature 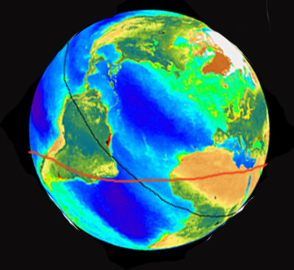 From birds dropping out of the sky and fish dying, to pets and humans feeling lethagic, I must say "What's going on here" ?

According to NASA, the North and South poles have always been shifting at an average speed of 10 klm per annum. Just
recently, this speed has increased to 40 klm per annum. Some say the poles are shifting to prepare us for 2012 and the great Armageddon. I laugh. Sure 2012 is coming and it could be the end for some, but it will certainly be a new beginning for many. I say "Bring It On" !

The pole shift is certainly affecting the weather. Here in Queensland Australia, we recently had our first inland Tsunami and as I write this, Severeve Tropical Cyclone Yasi is heading toward the Queensland Coast.

I feel very lethargic today, as do some of my neighbours, family and friends from around the globe. Could it really be the poles that are affecting us, or are people simply  using this as an excuse and should we just get over it and go to the doctor?

If our uneasiness IS due to the poles, then more and more people will begin to feel this too ~ the doctors, if not honest, could make an absolute fortune ~ Lol

Heres another spin to this story. I travel in "law of attraction" circles with my Facebook friends and many of them say that it's the other way around. WE are the ones that affect the weather. Thoughts are vibrational energies and with all the fear based (negative) thoughts out there from around our planet, we are creating cyclones, earthquakes, tsunamis etc. What the (feeling of the) mind can concieve and believe it can achieve.

Let's take this one step further. Back in the 6th or 7th century, there was King Canute.True story. Anyway, King noticed the tides and how they came in and then went back out again. He did not like how this happened so being King, he believed that he could stop the tides.

He had his throne taken to the sand when the tide was out and he sat upon his throne until he awaited the return of the tides once again. As the tides came in, he held up his hands and commanded the tides to stop. The King remained on his throne believing that the tides would listen. Needless to say, King Canute was eventually drowned by the rising tides.


OK, back to our 21st century now. First I mentioned the pole shifts and weather affecting people. Secondly I told you about how it could be the other way around and how our thoughts actually affect the weather. ( I could have gone into alot more detail with both of these subjects but then again, this is a note, not a novel ) Thirdly I shared the story of King Canute and how his thoughts and actions could not change the tides.

Dear O dear ~ What to believe ?

Well, heres my side of the story. Yes, the shifting of the poles is certainly affecting the weather. There will be more "natural disasters" but hey, we've been through them before and we will get through them again.

I do believe that our thoughts produce a vibrational energy that creates our physical realities. Our thoughts attract things and I have proven this for myself in my own life experiences. (this free video will explain it all)

I also believe that with our thoughts, our mass consciousness, we do affect the weather. At a guess, with 95% of the earths human population that have absolutely no idea of the power of thought, well, the fear-based media news helps to put the 'icing on the cake' for those people. More to be scared of, more to fear, more negative vibrational thoughts being sent out into the universe and WALA! The universe certainly responds with pole shifts, earthquakes, cyclones, tsunamis etc.

However, I don't believe we can change the weather, just like King Canute. The moral of that story is that no matter how much the King believed that he could stop the tides, Mother Nature will always have Her own agenda.

This brings me to the conclusion that Mother Nature has a mind of Her own. Her own thoughts. Her own actions. Her own outcomes. I believe She is responding to the mass consciousness of our planet in such a way that sees Her "shaking off" the negativity (with quakes etc), to make way for the new world. The new Her, and if the prophecies are true, those 5% of us that can continue to live in a mind state of love, will see this new world some time around 21st December 2012.

So, to all of those people that believe they can change the weather, could you please stop the poles from shifting because many of us are tired of feeling tired. And if no-one can stop Mother Nature and Her pole shift, much like King Canute, then I say start NOW to live from a place of the heart and buckle up and enjoy the ride. Yeee-ha!